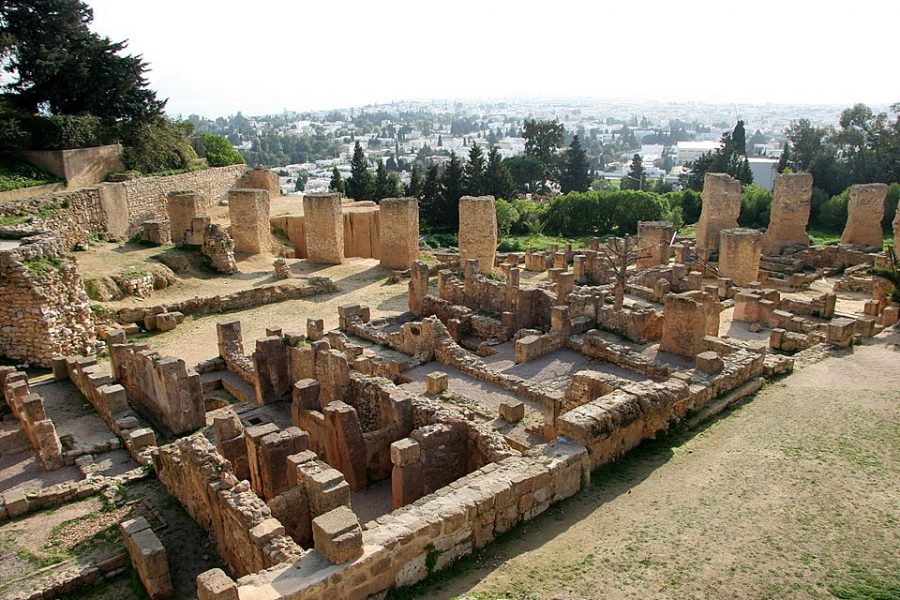 Once Rome’s major rival, Carthage was the city of the seafaring Phoenicians forever memorialized in the Punic wars. The atmospheric ruins of this ancient town now sit beside the sea amidst the suburbs of Tunis. A warning that even the greatest cities can be reduced to rubble. the ruins are extensive but spread out and if you’ve been lucky enough to visit ancient city sites such as Ephesus in Turkey or Volubilis in Morocco, which are well-preserved, Carthage can seem quite underwhelming at first but these UNESCO world-heritage-listed remnants are hugely important historically and any tourist interested in North Africa’s ancient past shouldn’t miss a visit here.

Carthage was built on a promontory with sea inlets to the north and the south. the city’s location made it master of the mediterranean’s maritime trade. all ships crossing the sea had to pass between Sicily and the coast of Tunisia, where Carthage was built, affording it great power and influence. two large, artificial harbours were built within the city, one for harbouring the city’s massive navy of 220 warships and the other for mercantile trade. a walled tower overlooked both harbours. the city had massive walls, 37 km (23 mi) in length, longer than the walls of comparable cities. most of the walls were located on the shore, this could be less impressive, as Carthaginian control of the sea made an attack from that direction difficult. the 4.0 to 4.8 km (2.5 to 3 mi) of the wall on the Isthmus to the west were truly massive and were never penetrated. the city had a huge necropolis or burial ground, religious area, market places, council house, towers, and a theatre, and was divided into four equally sized residential areas with the same layout. roughly in the middle of the city stood a high citadel called the Byrsa.